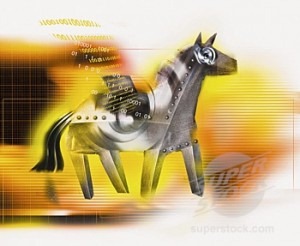 Most of you may be curious to know about how to make a Trojan or Virus on your own. Here is an answer for your curiosity. In this post I’ll show you how to make a simple Trojan on your own using C programming language. This Trojan when executed will eat up the hard disk space on the root drive (The drive on which Windows is installed, usually C: Drive) of the computer on which it is run.  Also this Trojan works pretty quickly and is capable of eating up approximately 1 GB of hard disk space for every minute it is run. So, I’ll call this as Space Eater Trojan. Since this Trojan is written using a high level programming language it is often undetected by antivirus. The source code for this Trojan is available for download at the end of this post. Let’s see how this Trojan works…

Before I move to explain the features of this Trojan you need to know what exactly is a Trojan horse and how it works. As most of us think a Trojan or a Trojan horse is not a virus. In simple words a Trojan horse is a program that appears to perform a desirable function but in fact performs undisclosed malicious functions that allow unauthorized access to the host machine or create a damage to the computer.

Now lets move to the working of our Trojan

The Trojan horse which I have made appears itself as an antivirus program that scans the computer and removes the threats. But in reality it does nothing but occupy the hard disk space on the root drive by just filling it up with a huge junk file. The rate at which it fills up the hard disk space it too high. As a result the the disk gets filled up to 100% with in minutes of running this Trojan. Once the disk space is full, the Trojan reports that the scan is complete. The victim will not be able to clean up the hard disk space using any cleanup program. This is because the Trojan intelligently creates a huge file in the WindowsSystem32 folder with the .dll extension. Since the junk file has the .dll extention it is often ignored by disk cleanup softwares. So for the victim, there is now way to recover the hard disk space unless reformatting his drive.

The algorithm of the Trojan is as follows

1. Search for the root drive

2. Navigate to WindowsSystem32 on the root drive

4. Start dumping the junk data onto the above file and keep increasing it’s size until the drive is full

5. Once the drive is full, stop the process.

You can download the Trojan source code HERE. Please note that I have not included the executabe for security reasons. You need to compile it to obtain the executable.

How to compile, test and remove the damage?

For step-by-step compilation guide, refer my post How to compile C Programs.

To test the Trojan,  just run the SpaceEater.exe file on your computer. It’ll generate a warning message at the beginning. Once you accept it, the Trojan runs and eats up hard disk space.

NOTE: To remove the warning message you’ve to edit the source code and then re-compile it.

How to remove the Damage and free up the space?

To remove the damage and free up the space, just type the following in the “run” dialog box.

Now search for the file “spceshot.dll“. Just delete it and you’re done. No need to re-format the hard disk.